A few weeks ago our Busso family came together for dinner at a local restaurant. We shared in our accomplishments nearly a month after the 2015 Ironman Busselton having had the chance to recover and come back from holidays. My toast summarized how I felt about our family including Karen McPherson who was leaving us for retirement in Cairns. “To all of you, we started out as friends but became family.” We all realized that what we had experienced a once in a lifetime opportunity. No, I’m not referring to finishing an Ironman, but the experience of meeting a group of people, from different ages/walks of life with different ideas and opinions but growing with each other to have genuine love and respect for each other, as if we were family. For our 60yr and 56yr olds, even they had never experienced this.

Below is an account that I share with you from our own Lynn Treis who once again is stepping up to her 70.3 challenge at Busso this year. It’s not a race report, there’s no FTP, IF, VI, HR, or pacing metrics. It summarizes the experience, the journey. Enjoy. 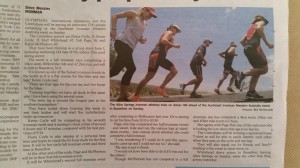 The Busso Family was highlighted in the local Centralian Advocate numerous times. This photo is of us running up ANZAC hill

It’s often difficult to explain to someone what makes you fall in love with Triathlon. Competing at an international level requires much dedication, sacrifice and commitment. As a Triathlete you want to know what your body is capable of doing and you feel privileged that you can be a part of the sport. It takes unbelievable discipline and motivation to face the weeks and months of training where you are often tired and fatigued. Months of punishing training in all types of weather conditions would make you think twice about participating in the sport itself; however it’s the journey along the way and the friendships that you make that give you purpose.

Triathlon is a sport that has no boundaries and for this reason it attracts a diverse range of people of various ages and mixed genders. Although it is an individual sport the training often affects those around you including loved ones, friends, sporting clubs and the wider community.

If you ask the five Triathletes that participated in Ironman Busselton what they loved about competing and they would all say it was the team spirit, the friendships formed and the journey along the way that made this event. The event itself is over within a day with a cut-off time of 17hours. Ironman athletes are risk takers. The risk in knowing that once committed there’s no turning back. They would swim 3.8KM, Cycle 180KM, and Run 42.2KM in the toughest one day endurance event in the world.

The five friends of different ages and backgrounds formed a bond through the gruelling undertaking of 12 months of triathlon training. They named themselves as the “Busso Team 2015” who had their sights set on conquering the Sun smart Busselton Ironman in Western Australia on December 6th 2015.

Leading up to the event the team talked about the commitment needed, the sacrifice made and the discipline required to prepare them for the day. This would mean missing out on social outings with work colleagues, friends and family and at times missing those special occasions and celebrations. Despite all the odds, a lack of ocean, open roads filled with wide loads and cattle trucks, hot, windy conditions they set their sights on the Ironman event.

They were fortunate to have the direction of Kevin Coyle, Fiona Coyle and Matthew Whitehead who had already successful competed in varying Ironman events with outstanding results. Following the Joel Friel Training program “Your Best Triathlon” the team began their training journey in March 2015.

Weeks consisted of varying speed skill and endurance training to develop their base fitness and enable them to conquer the 3.8km swim, 180km cycle and 42.2km run. Having trained a long side the group was both inspiring and life changing. A sense of admiration could be felt from the wider community. A buzz of excitement from varying clubs “Women On Wheels” and “Alice Springs Running and Walking Club” knowing that the group had come from humble beginnings with some of these community clubs.

Swim training consisted of having to initially swim in a 25metre indoor pool until the winter period subsided and the outdoor pool became accessible. Distances of 4km to 6km swims were achieved to build endurance. Early morning, late evenings and weekends spent practicing drills and testing swimming ability. Assistance from the pool guards at the Alice Springs Aquatic Centre was required to undertake early morning wetsuit swims to prepare them for the open water swim. The team often had to swim in lanes which were already crowded with swimmers, while often feeling cramped and fatigued. Swimming became second nature in which they would overcome the barriers to reach their goals.

Riding from Alice Springs to varying locations on the outskirts provided spectacular views and open space. Some of these memorable rides included Stanley Chasm, Hearts Bluff, Jim’s Place (South Highway). Flat undulating roads would stimulate race like conditions. They faced varying weather conditions with cold, hot, windy elements that would test their strength and mental agility. Careful planning and consideration was needed to ensure enough water and nutrition could be carried with them and at times accessible. Family and friends would drive out and provide pit stops to assist with cold water, ice, coke anything that was needed to help the group finish their gruelling 6hr rides in 40 degree heat. Many times they felt deflated and exhausted but they stuck with their plan.

Runs along the MacDonnell Ranges, trail runs through to Simpson Gap, speed work on the treadmill and strength would be gained through ANZAC hill runs. The team battled the elements, rain, wind, cold and heat to achieve the massive distances. Regular training sessions would enable the team to meet and practice specific runs prevalent to accomplishing a 42km run after already having to swim 3.8km and a 140km ride. ANZAC hill sessions particularly tested all limits with back to back non-stop hill running to help build strength and mental resilience. They would encourage each other to keep going and to push their bodies to their limit.

They would put all the knowledge they had gained and practice putting it all together. As a team they arranged a Big Day Out, which would consist of doing the varying distances over a day to prepare them for the Ironman event. The Day consisted of an early morning swim for 1 hour at race intensity, using race-day gear. The team arranged time to swim at the local pool where they would wear wetsuits to prepare for the ocean water. They had a break of 1-2hours following the swim. A mid-morning ride for 5hours would comprise of mimicking the intensity of the event day, while ensuring that nutrition has tested and planned. They headed out towards Jim’s place in hot and windy conditions. A support team ensured that extra water and nutrition was accessible. Finishing the grueling ride they would rest for 1-2hrs and then prepare themselves for the last leg, the run. A 2 hour run followed through the township of Alice Springs. Considering what they had just gone through they managed to push ahead and finish their Big Day Out. That evening they celebrated with a few drinks and conversations of their efforts. There were highs and the lows, but they would finish knowing that they were a step closer to reaching their goal and the friendship formed would last a life time.

The team flew out of the Alice and headed to Perth. They would drive to Busselton from the airport with much excitement and anticipation. With restless sleeps they would prepare themselves for the day by carb loading “a term known in Triathlon” and ensure they knew the course from start to finish. Registration and a race brief took place. The day prior to the event they were informed that the conditions were quite choppy in the water. As a triathlete you learn to train in all types of conditions although it’s impossible to know what the conditions are going to be like.

One of those pictures that you just look at and can see the love for one another. We started as friends but became family.

They would each wake early that morning and fuel their body with the nutrition that was needed to get them race ready. Despite the cold, windy, choppy and wet conditions each team member set off together on the banks of the beach with one thing in common, to reach their goals and continue their journey together. A gathering of Alice Springs Family and friends watched from the sidelines and shouted words of encouragement; after all it was a team effort. A group of anxiouse friends and family were on-line anxiously waiting for the results to roll in as each person crossed the line. The Busso team 2015 had finished.

For a population of 28,000 the Alice Springs Triathlon Club has developed some outstanding results in the world of Triathlon. Who would have thought that five people representing a small club could have such a huge impact on the world of triathlon? Through all their struggles leading up to the day they had finished and had placed in respectable times. No team at Ironman Busselton 2015 had accomplished such an outstanding result. The results were phenomenal: 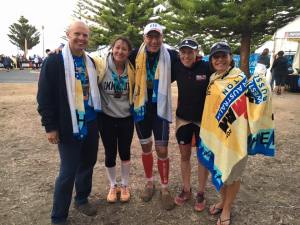 After finishing we were all there supporting each other. And the goal of many athletes “finishing before the sun goes down; avoiding light sticks”.

That night at the awards ceremony both Fiona Coyle and Karen McPherson were offered the opportunity to compete at the World Championship in Kona, Hawaii. They both accepted with much pride in themselves and their team mates.

It is an honour to have trained with this team and rewarding to see that they had accomplished so much. It’s wonderful that a unique group of people followed the same journey, a journey which would end. Their legacy’s will live and on and we will never forget the “Busso Team 2015”.

There was a large contingent of supporters including friends and family from 3 separate states/territory. 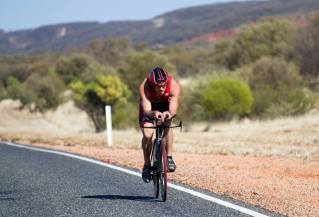 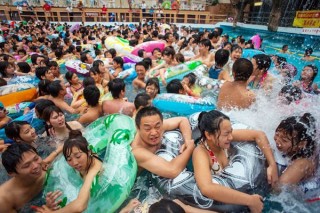 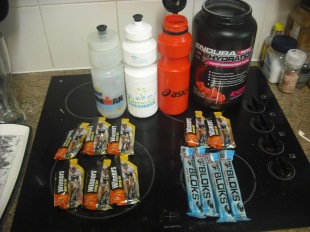 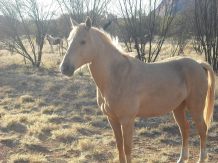 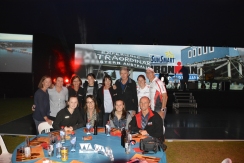 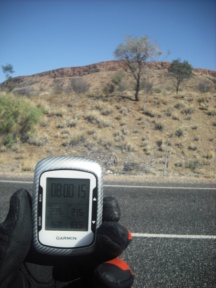 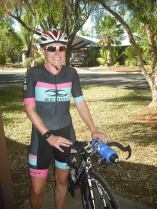 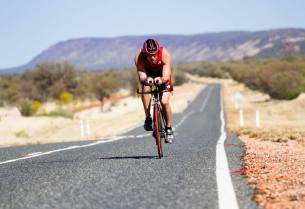 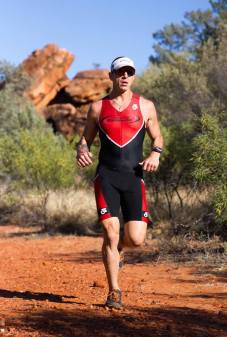 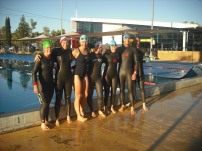 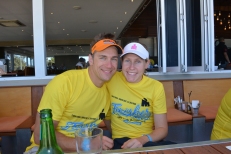 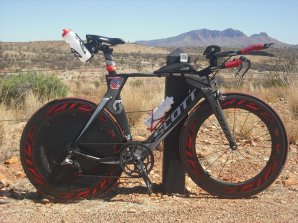 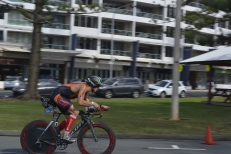 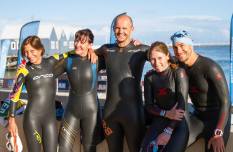 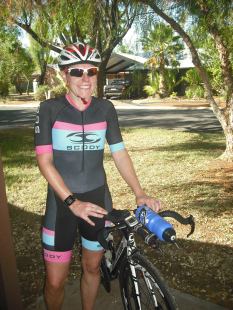 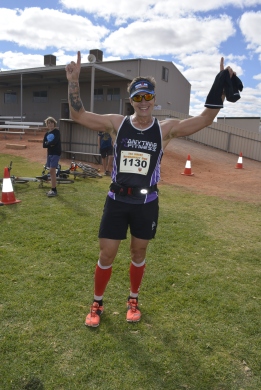