I’m an analyst. So I analyze. Read and you may learn something.

#IMAZ is only 4 weeks away from today which according to Joe Friel tells us that today is a race simulation known as BIG DAY OUT. Yesterday we took it easy carbo-loading with Sprite, Sugar Cookies, Bread, and Pasta. Training wise we did a 1.5k recovery swim, 45min easy bike ride, followed by a 20min Brick family run with Fiona and Sydney. The traditional bottle of Champagne finished off the night with Spaghetti and more bread.

Sunday 6AM wake up. I had 2 pieces of toast with Jam and butter, 2 regular Red Bulls, and a banana. With 30min to go I had a full pack of Clif Shot Bloks with caffeine (200 cal).

We drove 90seconds to our 25m heated, outdoor, salt-water pool at Rancho Sahuarita, Arizona. The 8 lane pool had one other swimmer. I took a lane and Fiona took the open water. Around 8:05am, I stepped into the water with my gold #AWA cap, goggles, and pull buoy (to closely mimic wetsuit). I went out for a count of 40 strokes which is just short of 50meters and for the next hour kept the pace at IRONMAN effort. No stopping and constantly looking at 500meter, 1K, 1.9K splits to verify the distance covered. 1K’s were covered in 15:33, 15:39, 15:44. This was quite good as there was barely any slowing down between K2 and K3. 1.9K was covered in 29:40. And another 29:56 later another 1.9K was covered totaling the IRONMAN Swim in 59:36. My cap was almost off my head by this point. NOTE: Put goggles underneath Cap.

BDO #1 compared to BDO#2 shows that I was faster but much more consistent today. And, while I may had gone faster over the first 200meters a month ago, it looks like that may have cost me. However, I have continued to work mostly doing 3x1K of Fins, Pull, Pull/Paddles and this sequence thanks to Rob Johnston helps develop the strength on the back-end.

Even pacing throughout the entire swim. Definitely a good indicator of swim fitness! So with a 1:01:23 swim last year I am still in that realm. Going sub 1 hour is in my grasp. Mental focus will be the name of the game. It’s easy to swim fast in a pool when you have no one around you and have a line below you. It’s totally different when you can’t see your hands and have thousands of swimmers around you! I’m looking forward to utilizing the wave start again this year!

We used to do these tests rides of 5 hours but I now go to the Total Stress I expect to generate on Race Day. Last year at IMAZ I held only 240TSS for the 4:50:22 bike ride on 235avg power. Today, I covered that total stress 57minutes faster or in 3hr53min. I also held avg power of 30 watts higher than last years race. But there are key differences between todays ride and the race in 4 weeks. 1st, I had 28seconds in Zone 1 Recovery. Meaning, I had barely any down time. I hardly coasted at all for the entire duration. Also, I rode on Zwifts new course in Central Park, NYC and while Zwift says I climbed 8,200’ which is no where near realistic, It was certainly hillier than IMAZ will be. This helped generate bigger power numbers. And this is why 95% of the riding this season was inside; it can’t be beat!!

Today’s ride was the best and most powerful ride I have ever ridden. I owe this to Zwift and the Wahoo Kickr. A $1K investment that Fiona and I used this season for our 4th anniversary. Traditionally, BDO’s are very indicative of where I will race. So with a 261avg power 4 weeks ago and 265avg power today, I can be confident in expecting around the 260-265 power area of around 3.3w/kg. And, I reckon this will return me around a 4:40-4:45 bike ride.

One of my best rides was Ironman Cairns 2016 when I qualified for Kona. My 4:59 split was the 13th fastest Amateur split of 1,279 finishers and my TSS was 287 on 255watts on a very hilly and tough course. Then last year at Arizona with the TSS of 240 on 235watts on a relatively flat but windy course I had the 14th fastest Amateur split of 2,182 finishers. So looking to the race I would be super happy with a PB closing in on 4:40 and a top 10 split.

Nutrition wise I was pretty decent. But at 3hrs my mind started to wonder a bit. I had a RedBull which hit 30min later and then I started drinking more because I hadn’t drank enough. I realized the mind was getting dehydrated. But, good caloric total. 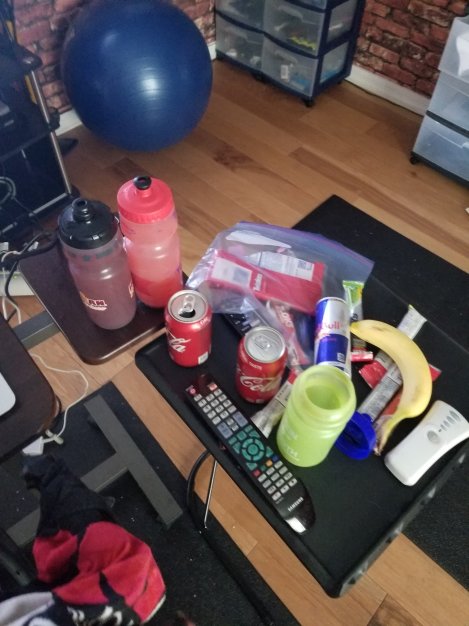 In terms of Fiona, she started out side and then ended up inside. I’d never seen a storm like that! Check out my videos on my facebook page: https://www.facebook.com/kevinpatrickcoyle Another good reason to ride inside!

These 2 BDO’s have taught me significant strategies that I hope to master come race day such as Avoid Zone 4 and Giant surges. At 177 pounds, I have large legs and they can’t handle that. Next, be realistic starting out at around 82%, Stay consistent and within a range, not a predetermined number. Drink. And Focus!

After about 90minutes and a Plant Based Raw Fusion protein shake with VEGA Recovery and Almond milk, we headed to the gym. I wore my race day kit of Wattie Camo tri shorts and a Wattie run top. This will be my first ever IM wearing a running shirt. I used my brand new Plantronics BackBeat FIT 505 Wireless Sport, Bluetooth, and water resistant $100 headphones I bought from BestBuy yesterday after trashing the latest water-proof headphones after 2 months of use! The new ones are noise cancelling, over the head, and worked just fine. I recommend these if you like over the head like me. In the ear always moves, falls out, and sits in the sweat in my ears!

OK so I started out at 8:27/mile and then walked 15seconds after every mile. I had to hit the loo after 5miles. I did take 2 Imodium before the bike ride but forgot to take them after the bike. This has been an issue for many IM’s now. I listened to music videos on YouTube and repeated. I had 1 bottle of Gatorade over the first hour, then turned to Coke finishing only 1.5 bottles of Coke. I didn’t eat anything other than drink. This was not nearly enough liquid for me but should be able to drink more from cups at the aid stations.

I’ll be competitive on the swim/bike but this damn run. I went 3:26 at IRONMAN Western Australia in 2015 in my 9:22PB and I’m a 3:02 marathoner. But have been awful over the last 2 years running in the 3:40’s and higher. This really takes me out of contention. So todays run, while slower than what I HOPE to run at helped give me some mental confidence as I talked to myself for most of the run. Walk breaks of 15seconds slowed pace down by 7seconds averaging 8:34/mile. 1 month ago I held 8:32 on fresh legs, the day after the swim/bike.

BDO is a test of fitness and a learning experience. In 4 weeks I get to swim, bike, run and hopefully be called an IRONMAN once again alongside wifey Fiona Coyle and best mate coming all the way from Alice Springs, Australia – Duncan Rogers. Today shows me that I’m the strongest I’ve ever been. I’m also the lightest I’ve been. But in order to qualify for Kona I will have to absolutely give it my best effort across all 3 disciplines. There are 6 quality athletes that I know of with only 2, maybe 3 spots available. With 173 athletes in the highly competitive M30-34 A/G I will have to finish on the Podium.

Time for a drink. 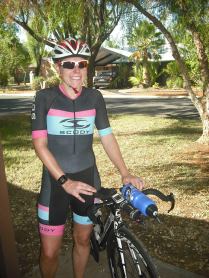 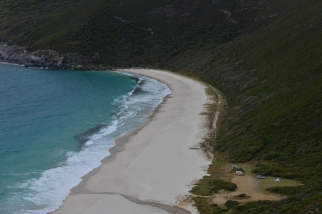 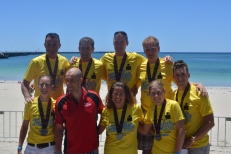 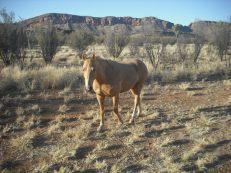 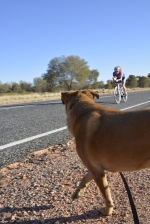 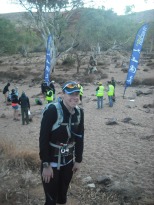 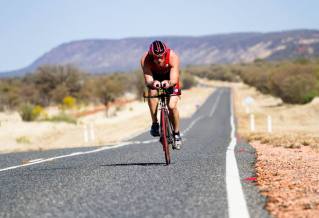 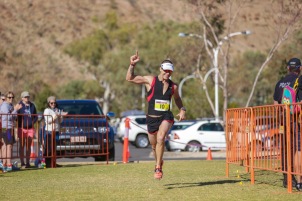 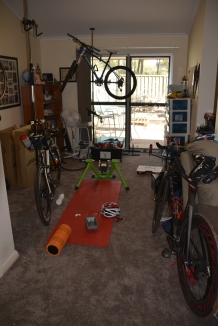 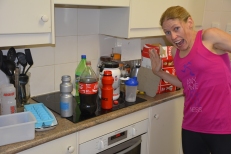 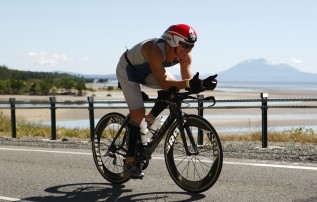 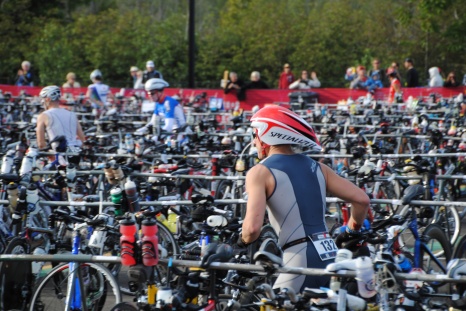